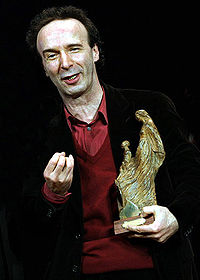 ROBERTO BENIGNI
Roberto Benigni was born in Mercy in the province of Arezzo in 1952, but soon moved to Vergaio in Prato. In 1972, together with Silvano Ambrogi, Carlo Monni and Aldo Buti, load is transferred only hope for Rome, where he began work in TV. The meeting with Renzo Arbore him to participate in other shows such as The Sunday that bring fame to the general public. The first film of 1977 (criticatissimo) Berlinguer I love you.
And then the film with Renzo Arbore (The Pap’occhio), with Massimo Troisi (We just have to cry), with Walter Matthau (The little devil), with directors like Federico Fellini (The Voice of the Moon) and performers like Paul Village (also in The Voice of the Moon) have made ​​one of the greatest comedians Benigni’s Italian contemporaries.
1999 the greater recognition of the film world:
The three Oscars for the film Life is Beautiful.

Benigni made ​​his debut in the theater very young: in ’72 he’s onstage with Pamela Villoresi in a true story, taken from The Naked King, directed by Paul Magelli. In the same year I played with Carlo Monni burosauri in Rome, under the direction of Donato Sannini.Dopo other shows with Lucia Poli, Marco Messeri and Giuseppe Bertolucci, comes the great success with live performances: it is the turn of Tuttobenigni.

It’s 1983: the first is a monologue Tuttobenigni more than two hours where Benigni plays, comments, dialogue, paraphrasing many themes and topics from politics to God (which he called Guido), the reading of some biblical passages. Directed by Giuseppe Bertolucci, escalating a hilarious comedy.
After this, Lectura Dantis and after the fifth and seventh canto of Dante’s done at the University of Siena in 1990, you can go directly to the second edition of Tuttobenigni, that of ’95-’96: Benigni here is an overview of the political landscape since then, that existential themes-religious, as the famous staging of Judgement or flood. On the incredible effectiveness of the construction of the story of Noah and the Ark by dictation from God incipit of the Bible.
Benigni’s debut takes place in Rome, just 20 years, in the comedy "The Burosauri" Silvano Ambrogi.
The first real character, Mario Cioni, invented in 1977 by Giuseppe Bertolucci, appears first in the monologue Cioni Mario di Gaspare was Julia. It is then played by Benigni also in the TV series and films-Free Wave object of many criticisms and then censored-Berlinguer I love you by Giuseppe Bertolucci, has only recently rehabilitated and reinstated in the distribution channels. The first character is an irreverent Benigni, protesting, surreal, which questions the society of the time and its customs, not to mention the political satire which is always present in his later works.
In 1979 he starred in the film by Marco Ferreri asylum seekers.
In 1980 the work with Renzo Arbore Pap’occhio in the film, also a film for a long time kept away from the cinemas for involvement in the plot of the film, the Vatican.
Renzo Arbore, in fact, is even known as a success by the then newly elected pope, and is called Karol Wojtila the direction of the Vatican Television Network.
In 1981, Benigni worked in the film by Sergio Citti soup.
The 1983 is the year of his first job as a director: Renzo Arbore brings all his "band ‘(in addition to Benigni also Mario Marenco, The Flag Sisters, Andy Luotto, Isabella Rossellini, George Bracardi) that builds a series gag played on puns and parodies. Benigni’s hilarious scenes in the corridors of the Vatican and in the Garden of Jazzemani, with a clear allusion to the Gospel.
You disturb me is the title of his first film directed by and starring himself. 4 episodes (the first being a meeting between Benigni and a Jesus as a child) and hilarious at the same time ironic and denunciatari.
Then the second film as director, this time paired with the exceptional Massimo Troisi: We just have to cry, one of the best films of Roberto Benigni for the brilliant idea of the journey back in time el’azzeccata combination of historical events and characters of the plot .
In 1986 he joined a number of films produced in the United States, of which the best known in Italy and taxi driver by night, in which Benigni part in an episode.
In 1988 he began a series of raids irrepressible television and scoops the box office of the Italian film with the film The Little Devil starring opposite Walter Matthau and in collaboration with Vincenzo Cerami. Benigni is here a little devil (named Judith), which after being released from the body of a middle-aged woman with whom he had seized, the prelate met Walter Matthau where he became a friend. On the set, the wife of Roberto Benigni, Nicoletta Braschi.
In 1989, says starring in the last film by Federico Fellini, The Voice of the Moon, along with Paul Village.
The 1991 is the year of Johnny Toothpick, who sees more work Benigni writer, director and performer. Great success in both film and videotape also bestowed to this work.
Two years after Roberto Benigni takes part in the film Son of the Pink Panther Blake Edwards.
The Monster arrived in 1994, another work of actor-director Roberto, who, referring to the sad story of the Monster of Florence, jokes on each other and especially the conduct of investigations by law enforcement.
In 1997 Robert follows the tragicomic aspects already present in The Monster, moves and having fun the whole world with his extraordinary film
Life is Beautiful, which earned him the Grand Jury Prize at Cannes in 1998, and 3 coveted gold statuettes in 1999.