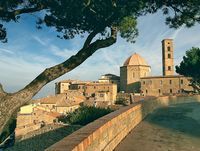 In the heart of the Tuscan countryside rises Volterra, charming town of Etruscan origin (seventh century. AC), which contains testimonies of thirty centuries of history.

Going beyond the medieval walls, built within the existing and more extensive Etruscan walls, leads to the architectural beauty of this jewel of Italian art, starting with the beautiful scenery of Piazza dei Priori, the main town civic life, where overlooking Palace priori (XIII sec.), Praetorian Palace and the Tower of the Pig, Bishop’s Palace, Palazzo del Monte Pio Palace Parade. Piazza San Giovanni on the face instead of the religious buildings: the Cathedral, Baptistery and the Hospital of Santa Maria (Studies and Conference Center today). Along streets and alleys, elegant Renaissance buildings alternate with the more austere medieval tower houses, up to the imposing size of the Medici Fortress, now converted into a prison.

Volterra alabaster cities: it is not uncommon to find small workshops where we witness the working of white stone, an activity that has its roots in the past. Volterra is in fact an Etruscan city, which retains a door (Door Arch) and numerous exhibits at the Museum Guarnacci.

Volterra has offered an interesting museum that includes, in addition to Guarnacci Museum, the Art Gallery, which houses valuable paintings such as Rosso Fiorentino’s Deposition and the Annunciation by Luca Signorelli, the Diocesan Museum of Sacred Art and the Museum of Palazzo Viti ‘Alabaster.

The later Roman period remains the Theater (I century. AC), which hosts the Festival in the summer of theater, music and poetry.

About events, Volterra has a full calendar of summer events ranging from Volterra Theatre (included those of the Society of Prisoners) and Volterra Jazz Week, the historical and the Medieval Tournament dell’Astiludio, to gastronomic festivals and Volterragusto Market Volterra and Taste.

The territory of Volterra, was between the river valleys to the north and south of the river Cecina, presents a particular morphology, from gently rolling hills of the harsh cliffs, gullies and biancane to the Nature Reserve Berignone-Tatti. On the western slopes of the high hill on which stands the city you can admire the impressive geological phenomenon of the Crags, a huge chasm originated by the erosive action of water, which in the past has destroyed part of an Etruscan necropolis and a church. Nearby are the church of San Giusto and the Abbey Camaldolese (XI).