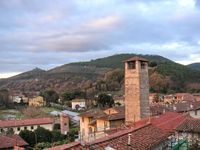 The medieval village of Vicopisano is part of the Monti Pisani and natural environment, which covers a large part of its territory. Vico for its strategic position has always played a decisive role as a frontier castle during the wars between Pisa, Lucca and Florence. Unlike other castles in the area, whose military defenses were dismantled by the Florentines, the castle was fortified in 1440 by the architect Filippo Brunelleschi.

Vicopisano has maintained the appearance of a fortified medieval heritage and has a remarkable among which twelve towers (XI-XV), two palaces and medieval fortress of Brunelleschi, today reopened to the public with guided tours.

The first weekend of September, at the Medieval Festival, the country remembers its past with shows on the street and a dinner of traditional recipes. All year round instead guided tours to a path that includes the Praetorian Palace, the Prisons Vicarial, the Historical Archive and the exhibition of relics of the former Monastery of St. Michael the Wart, near which stood the imposing Fortress of the wart.

The water of olive groves, whose qualities were appreciated in the Middle Ages, ga, is characterized by the unmistakable taste and is particularly recommended for sportsmen and for digestive disorders.