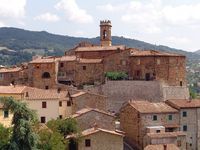 Documented as early as the tenth century, Pomarance has a Romanesque church with works by local painters and Cristofano Roncalli Cercignani Nicholas (known as Pomarancio). Among the many mansions are reminiscent of the Palace Vicarial, the Praetorian Palace, the Museo Casa Bicocchi, Palazzo Ricci (which displays a collection of ceramics from the sixteenth and seventeenth century) and the Palace Theatre De-Larderel, which together with the Theatre of the brave home cultural events.

The recent history of Pomarance is linked to the name of the French engineer François De Larderel, who started the construction of the Larderello, using geothermal energy from the ground. The landscape here is characterized by huge pipes which lead the steam to power and cooling towers, creating an unusual atmosphere, deserving the name "Valley of the Devil." We recommend a visit to the Museum of ENEL Geothermal, live shows where the power of the force unleashed by an endogenous head. Geothermal energy is still exploited through the latest technology to provide electricity and district heating to the whole area.

Excursion destination is the imposing fortress Sillana (XII century), situated in a dominant position and particularly attractive at night when illuminated. Are still visible near the remains of the Parish of St. John (X century) in the Romanesque style with elements of Norman.

In the territory there are the forests and Monterufoli Berignone-Tatti, managed by the Mountain Community of Val di Cecina and added to the list of Protected Areas of the Tuscan Region. The two forest systems are developed along the river Cecina, in a wild and unspoiled, where guided tours are available for hikers.