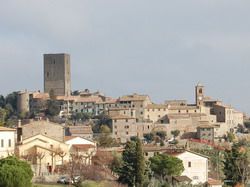 The history of Montecatini Val di Cecina is linked to the copper mines of Camporciano, already used in Etruscan and remained active until 1907. The cessation of mining, which had so contributed to the development of the area, led to a profound social and economic crisis.
Walking through the streets of the charming old town are the Castle Square, dominated by the imposing tower Belforti (XI) with a quadrangular base, no battlements, with thick walls banded eagle. The tower, owned by households Volterra Belforti, Pannocchieschi and Inghirami, was the seat of the Captains of Volterra and Florence before moving to the French barons de Rochefort. Two holes opened across the telescope to serve as the Keep the fortress of Volterra and Sillana.
On the same square overlooking the church of San Biagio and the fourteenth-century Praetorian Palace, now home to the Center of Documentation and integral part of a circuit that includes the mining site Camporciano and Mining Museum.
Nearby is worth visiting some villages of medieval origin. A Querceto Castle takes place every summer an international festival of piano by Sassa, perched on a spur of a hill, you can admire a beautiful landscape; Miemo is known as a breeding center for wild boar, mouflon sheep and deer.
Among the events reported in particular wine, as the flavors of the Valley (May), September Montecatini and color and flavor of an ancient town, which takes place in mid-August to Sassa.