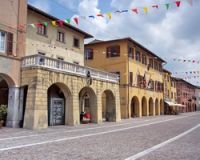 Situated along the Arno river and close to the foothills of the Monti Pisani, House is a commercial and manufacturing center of great importance to the flourishing furniture industry, which over time has been added to the agricultural sector.

In the villages, especially near the road Firenze-Pisa-Livorno, arose facilities, shopping centers and department stores. In the hamlet of Navacchio, House hosts a Scientific and Technological excellence, an important reference point for development and innovation of small and medium-sized enterprises.

Ancient fortified town, before then, especially agricultural trade due to its strategic location on the connecting road between Florence and the ancient port of Pisa, since the end of the 800 House has grown rapidly as a center for woodworking, so that it now considered a capital of Italian furniture.
Laboratories and furniture scattered throughout the town and its surroundings and the presence of an Art Institute with a specialization in the art of wood, giving the feeling of lively activities in the field of handicraft and furniture.
The Permanent Exhibition of Furniture, established in 1922 in the seat of the Workers’ Society, hosts the Museum of Arts and Crafts of Wood which collects objects, tools and equipment used in laboratories and workshops, with the aim of promoting the history and enhancing the heritage associated with craftsmanship and tradition of wood.
Among the many traces of the medieval history of the town, to see the Parish Church of St. Mary of the Assumption and St. John’s, around which developed the first urban core, and the thirteenth-century city wall, still partially preserved albeit with subsequent renovations. Among the many events that take place regularly point out the traditional Mercantico, held the first Sunday of each month from October to June, during which you can admire the antiques and local handicrafts.